Not the ‘official video,’ if there is one, but pretty good. 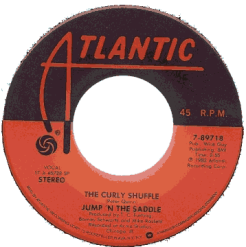 Wikipedia — “The Curly Shuffle” is a novelty song written by singer Peter Quinn as an homage to The Three Stooges film comedy team. It was initially recorded by Quinn’s group Jump ‘N the Saddle Band, and first released in late 1983. The timing of the recording nearly coincided with The Three Stooges receiving their star on the Hollywood Walk of Fame on August 30, 1983.[2] This recording made #15 on the US Billboard charts in early 1984.

In Australia, both versions were issued, and both were minor chart hits.

The song had the band’s lead vocalist Peter Quinn mimicking many of Curly Howard’s catch phrases. Issued independently in mid-1983, “The Curly Shuffle” was picked up by Atlantic Records in November, and was distinctive enough to climb to number 15 on the Billboard Hot 100 in early 1984. The group never managed to produce another hit, issuing only one further single (“It Should’ve Been Me”) before splitting up.

Music video
A promotional video was made using clips from various Three Stooges short films. The video was regularly shown on the Diamond Vision screen of the New York Mets at Shea Stadium in the mid-1980s, and became part of the fan experience. Additionally, it was included as a bonus feature on one of the 1984 Stooges compilation videos released by RCA Columbia Pictures Home Video.…