A popular song from a more innocent era… or, was it?

Wikipedia: “Little Bitty Pretty One” is a 1957 rock and roll song written and originally recorded by Bobby Day. The same year, the song was popularized by Thurston Harris. Produced by Aladdin Records (located in Los Angeles, Calif.), and featuring The Sharps on backing vocals, Harris’ version reached No. 6 on the U.S. Billboard Best-Sellers chart and No. 2 on the R&B chart.

Compare and Contrast
h/t Miklos on A♠

Alberta Oil Peon on A♠: There is a really fun performance of Hot Rod Lincoln to be found on EweToob, featuring Bill Kirchen, long-time guitarist with Commander Cody. It was a live concert in Washington, DC, and in the course of the song, he mimics the guitar style of about 20 different artists, and does it very well, too. It’s a real hoot.

Incidentally, Commander Cody (and many others) covered Hot Rod Lincoln. It was written by a country and rockabilly guy from eastern Washington, Charlie Ryan, and he actually built and drove the car described in the song. The car didn’t have eight cylinders, it had twelve. A Lincoln V12 from a Lincoln Zephyr of the ’40’s. The car still exists. 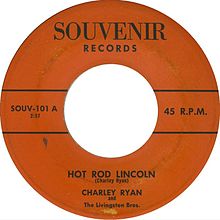 Wikipedia: Hot Rod Lincoln: “Hot Rod Lincoln” is a song by American singer-songwriter Charlie Ryan, first released in 1955. It was written as an answer song to Arkie Shibley’s 1950 hit “Hot Rod Race” which describes a race in San Pedro, Los Angeles between two hot rod cars, a Ford and a Mercury, which stay neck-and-neck until both are overtaken by “a kid in a hopped-up Model A”. “Hot Rod Lincoln” is sung from the perspective of this third driver….

A 1971 version, by country rock band Commander Cody and His Lost Planet Airmen on their album Lost in the Ozone, became the most successful version of “Hot Rod Lincoln”….

I think the one below is what Alberta Oil Peon was talking about.

Bill Kirchen
“Hot Rod Lincoln”
Washington D.C.
paliazzar – Feb 2, 2011 – 10:01
NOW IN HD! Bill pays tribute to all the old school players while getting sound effects aplenty from his Fender in this live version of his hit single from 1972.

END_OF_DOCUMENT_TOKEN_TO_BE_REPLACED

IMDb: Vera-Ellen began dancing at the age of 10, and a few years later became one of the youngest Rockettes. She appeared in several Broadway musicals until she was spotted by film producer Samuel Goldwyn in 1945. She was only 24 years old when Goldwyn cast her opposite Danny Kaye in Wonder Man (1945).  She danced with Fred Astaire in Three Little Words (1950) and with Gene Kelly in On the Town (1949). Blonde, slim of build, and a dancing sensation, she appeared in a string of light-hearted but successful films. Vera-Ellen retired from acting in the late 1950s.

The Three Little Words number reminds me a little of one of the great commercials of all time.

It’s from more than six years ago, so basically it reflects a reality you will only marginally recognize: two white people with hope, a family and dreams. The nerve.

But damn what a commercial.

IMDb: The Lone Ranger: The Return of Don Pedro O’Sullivan
Season 5, Episode 7, 25 October 1956
When Don Pedro O’Sullivan tries to return to Mexico to battle an army colonel who is ruling his district according to his own whims, the petty dictator sends his henchmen to intercept and eliminate the aging gentleman.…