h/t Rodrigo Borgia on A♠

…and we didn’t get any better footage of the punch and the aftermath.

That woman in yellow who blocked the camera was obviously a foreign agent. Possibly an extraterrestrial.

Fox News
Published on Jul 19, 2019
Apollo 11 astronaut Buzz Aldrin on the necessary next steps for NASA and the importance of the moon landing.

Neil Armstrong in his own words

It’s “60 Minutes,” but, so I presume, they had no reason to slant their report… this time.

In a 2005 interview, former astronaut Neil Armstrong discussed how it felt to walk on the moon, and why he shunned the fame that came from it.

Below: They didn’t look like such kids when they’re all wrapped up in their uniforms and space suits, but (from the perspective of half a century) this extremely young boy, dressed casually and hair loose, really is the first human being ever to set foot on another world (even if it was just our moon 😀 ).  Wot the heck, look at how young Bob Hope still was in 1969! h/t All Hail Eris on A♠

Apollo 11 astronaut Neil Armstrong, who became the first man to set foot on the moon earlier in the year, talks to U.S. troops during a surprise appearance with Bob Hope's Christmas show at the 1st Infantry Division headquarters.
Vietnam 1969@JackPosobiec @SebGorka @Carpedonktum pic.twitter.com/DpZ4DbMXpr

And let us not forget that loneliest man in the solar system, who all too easily could have had to ride back to earth by himself.

Smithsonian National Air and Space Museum
Published on Sep 2, 2016
STEM in 30 host Beth Wilson sat down with Apollo 11 astronaut Michael Collins to ask him a few questions about the far side of the Moon, his artwork, and his training. 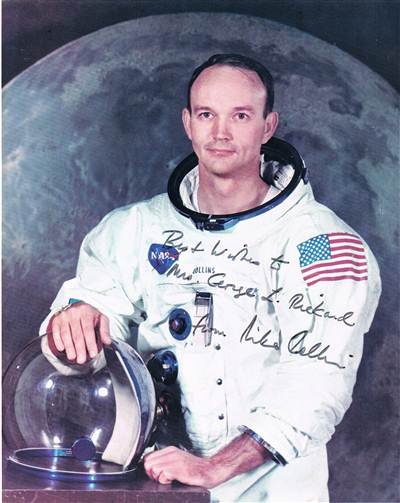 60 Minutes Australia — This year marks the 50th anniversary of that remarkable feat of technology and daring. And while the moonwalkers, Neil Armstrong and Buzz Aldrin, dominate our memories of the moon landing, there’s a third astronaut who deserves his place in history. Michael Collins piloted the Apollo 11 command module spacecraft in lunar orbit while his two colleagues collected moon rocks. In a rare interview he tells Sarah Abo if it wasn’t for him, one of our greatest successes would have been a monumental failure.